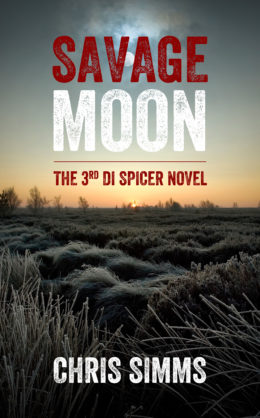 Third in the DI Spicer series

The body of a woman with her throat ripped out is found on Saddleworth Moor, near Manchester. She is discovered in an area where numerous sightings of a mysterious big black cat have been made. When analysis shows the hairs caught under her nails are those of a panther, it’s assumed the animal has killed its first human victim. But then a man DI Jon Spicer is investigating as part of an entirely different case is murdered in exactly the same way. Only this time the body is found in a secluded car park – a popular gay rendezvous far closer to the city centre. Soon DI Spicer finds himself hunting a killer dubbed The Monster of the Moor, a creature whose stealth and savagery strike terror into the local population and way beyond.

The quad bike bounced across the moors, headlight catching coarse blades of grass before rearing up into the infinity of the night sky. Like a rider struggling with an unbroken horse, the woman fought to control the vehicle. But rather than slow down, she kept the revs high, knees flexed in readiness for the next jarring bump.

Way off to her right the undulating red light that topped the radio mast disappeared behind a rise in the land. Finally she dropped her speed and the engine’s angry growl subsided to reveal the same sound that had sparked her reckless dash in the first place; the terror stricken bleating of a sheep.

‘Not another,’ she murmured, eyes turning to the shallow ravine that dropped away to her right. She yanked the handlebars round but the headlight’s angle was too high. A turn of the key and the engine shuddered into silence. Suffocating darkness engulfed her. She groped for the heavy-duty spotlight behind the saddle and, as she set off down the slope, began playing the yellow beam before her.
Maybe thirty metres away was a cluster of large boulders. A haze-winged moth homed in on the torch like a heat seeking missile. It landed on her cuff and she felt the frantic blur of wings against the back of her hand. Ignoring the insect, she trudged onwards, eyes fixed on a blood stained clump of white fleece. The moth launched itself on a sharp curve, flashed across the trembling shaft and plummeted into the turf. She reached the head high rocks, stepped round the outermost one and shone the light into the semi-circular grouping.

The sheep was lying on its stomach, head hanging over front legs that were tucked under its chest. Its rear legs were tangled up in entrails that glistened like freshly caught eels. An acrid smell stung her nostrils. She stepped closer then crouched down. Oh no. The animal was still alive. She swung the torch towards the base of the nearest boulder. Something to put it out of its misery. A rock. Anything. The light picked out a trail of blood dripping down the steep grit surface. The implications were just sinking in when the low snarl sounded from above. As the torch began to swivel upwards a heavy black form landed on top of her.

I’ve always had a love for wild and windswept places – probably thanks to childhood holidays spent tramping around Exmoor. (The promise of a half of Coke and a packet of crisps luring me along.)

Of course, the west country – and especially Bodmin – is well known for sightings of mysterious black cats, generally assumed to be panthers. And it was a report about someone who claimed to have been attacked by such an animal that got my imagination going with Savage Moon.

The person’s claims were soon dismissed, the feeble scratches on his face deemed far too superficial to have been caused by a fifteen stone cat capable of dragging prey twice its size up vertical tree trunks. But, I thought, what would the consequences be if someone was devoured by a beast living up on the moors?

My DI Spicer series is set in Manchester, which is overlooked by the bleak and brooding moors of Saddleworth. So that was my setting for the first killing sorted. Along with the rest of the country, DI Spicer has been reading the lurid newspaper reports about the attack but, at the start of the story, he’s working on a different case. Not for long. His main suspect is soon savaged to death in exactly the same way. Hairs from a black panther are also discovered on his corpse, and fear levels across Britain creep another step towards the hysterical.

As I wrote the book the way we, as a society, react to perceived threats became ever more relevant. At the time of writing, the UK was helping the US to invade and occupy Iraq. Soon the population of Britain was being told it faced a bloodthirsty new enemy – savage and merciless terrorists.

“An atmospheric, psychologically astute and emotionally literate study of the nature of predator and prey, with an unexpected ending.”

“An intricate plot is enhanced by good writing and human sympathy. Highly recommended.”

“Simms weaves an ingenious and surprising thriller with a big twist in the tale.”

“The plot has more twists and turns than a rollercoaster on Blackpool Pleasure Beach…fast-paced, involving, tense and well-written.”

“What made this stand out…was the plot line of political injustice that has one sympathising for the murderer.”

“Savage Moon is as powerful and unnerving a novel as is available.”

“There are some neat twists and not a few red herrings…towards the end I simply couldn't turn the pages fast enough to find out what happened next. Superb.”

“Satisfying and wonderfully atmospheric with some beautifully nuanced observations…a winner.”

“Chris Simms has never shown any reluctance to chill the blood of the reader, and that’s very much on the cards here as the tension is screwed down ever tighter.”

“Chris Simms is getting better and better. A chilling thriller, this will have you leaving the light on when you climb in to bed.”

Manchester, 2002. The Commonwealth Games are coming to town and the city is alive with possibilities.