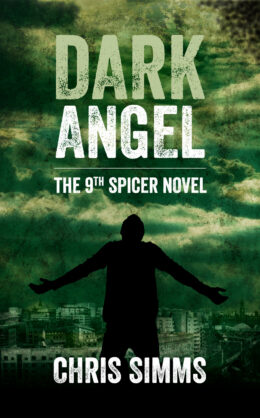 Ninth in the DI Spicer series

Something deadly is moving through the Manchester night. Bodies of rough sleepers are being found in abandoned buildings and forgotten corners. On the street, rumours circulate of a raven-winged presence that appears and vanishes at will.

Searching for a more rational explanation, Detective Jon Spicer is shocked to discover a single black feather at the scene of the latest death.

Then the troubled daughter of Manchester’s mayor runs away. Tasked with finding her, Jon is sent to live among the city’s homeless community. Once there, he quickly realises that, after sunset, anyone without shelter should fear the Dark Angel.

The soft night breeze carries the sounds of the city up to him. A sudden clatter as empty bottles cascade into a bin. Clop-clip-clop of heels striking pavement. Single coughs. Muffled conversations. Raucous bursts of laughter. A name shouted over and over. Lee! Lee! Fuck’s sake, Lee! And, behind it all, the low drone of car engines that never fade. Not even in the dead hours before dawn.

He opens his eyes and gazes at the massed lights beneath him. By letting his focus drift, he transforms the city centre into a distant, hazy galaxy. A constellation floating in the vast darkness of space.

When a life ends in this world, where does the person go? He knows the answer: somewhere better.

A scraping of cold stone against his cheek brings him fully back. He must have sagged forward, head tipping to the side. He becomes aware of how tightly his fingers grip the ornately carved surface. In the spring, when he’d first copied the key to the clock tower, he’d been told no one was allowed up here – especially when the peregrine falcons were nesting at the top.

Back then, a CCTV camera had been trained on the nest; images available to view online. Three chicks, clad in comedy suits of white feather. That summer, he’d sit on the benches in St Peter’s Square and watch the adults scoring the sky in their hunt for prey. Targeting weaker, slower birds. Helping them on their way.

Was that, he wonders, when I first thought I could do the same with humans?

He stares across the jumble of dark rooftops. Chimneys and skylights and air vents. The silhouettes of small plants sprouting from clogged gutters. In the gaps where he can see down to the street, there are people. Their little lives being played out. None comprehends how fragile things are. That person – staggering along, phone before his face – a minor stumble and the car accelerating along Princess Street will hit him. Or maybe the driver will swerve and plough into the huddled group smoking outside The Oak. Death is so much closer than any of them knows.

His chest begins to buzz. Short and regular. Moving back from the windowless arch, he reaches into the pocket of his black coat. That same number on his phone’s screen. The person calling doesn’t realise, but it’s his turn to die next.

He clears his throat. ‘Hello, you’re through to Manchester Veterans’ Helpline. Is that Wayne calling? It is, isn’t it? Recognised your number, mate. How are you feeling tonight? Don’t worry. Take your time. I’m listening. I’ll listen as long as you want me to. It’s all right, Wayne. Let it out. Just let it out. No one’s judging you. Remember, I’m here to help you. That’s all, just help.’

The ideas for my novels announce themselves in some quite unusual ways. This one, however, was especially weird! Flicking through a magazine, I spotted a photo of a man in silhouette with a dead seabird draped across his shoulders. By holding the tips of feathers, he’d stretched both wings fully out.

Why he’d done that I have no idea, but the image lodged itself in some dark recess of my mind. Gradually, it took root. Soon, a character started taking shape: a killer who marked each murder by flexing out a pair of wings mounted on his back. A dark sort of angel.

Who was he? Where did he come from? Why the strange ritual? Answers grew and the plot became more substantial. A lot of it was centred round the type of victim this killer chose: rough sleepers.

I made contact with an amazing charity in Manchester that employs ex-homeless people to act as guides for groups visiting the city. I spent time with a gem of a man who gave me many insights into what sleeping on the streets is really like.

This had a dramatic effect on the story because one of the first things the government did was offer the homeless community beds in hotels. An inspired decision for this vulnerable group, but one that placed my murderer’s targets out of reach.

Totally unable to see how to make the novel work, I had to put it to one side and focus on other things. Eventually, enough time passed to let me see how, with some minor adjustments, the story could still work. The final section went very smoothly and, by the Autumn of 2020, Dark Angel was finished.

“Genuinely the best book series I have ever read, and this latest chapter just further adds to my opinion. Truly brilliant!”

Manchester has just hosted the Commonwealth Games and the city is buzzing – until a series of shocking murders spreads fear through the streets.