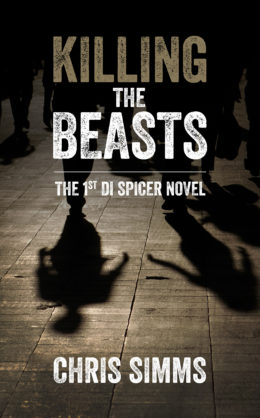 First in the DI Spicer series

Manchester, 2002. The Commonwealth Games are coming to town and the city is alive with possibilities. Caught up in the commercial feeding frenzy is Tom Benwell, account manager at an advertising firm. The pressure is getting to Tom – too many deals to make and lies to tell, and the passion for his job is waning. Meanwhile his friend, DI Jon Spicer, is on the fast track, showing a commitment to the job that borders on obsession, or so his girlfriend Alice tells him.

Then, in the aftermath of the Games, a series of brutal killings shatters the city’s new found spirit. Jon Spicer gets the case. Each victim has been murdered in the same bizarre and grotesque manner, yet the lack of motive leaves the police utterly baffled.

With the race on to catch the killer, both men find themselves caught up in a nightmare where the most innocent action can cost the highest price. In this nail-biting crime thriller, Chris Simms draws us into the shadows that lurk behind the city’s shiny new exterior, then plunges us into the mind of a madman

Later that night, as they lay naked and asleep, an empty bottle of champagne and a mirror speckled with dots of white on their bedside table, a dark blue Ford passed their driveway and pulled up in a space under the trees further down the street. The passenger door clicked quietly open and a man got out, straggly ginger hair briefly lit by the car’s inner light. Treading carefully, he walked back up the road and turned confidently through Tom’s open gates.

The metallic grey paint of the Audi TT reflected back with a liquid shine what little moonlight was breaking through the cloud layer above. The man’s eyes lingered on its shimmering form as he passed the vehicle. Cutting across the small patch of grass at the side of the garage, he stepped noiselessly up to Tom’s front door and crouched down.

With the tiniest of creaks, the letterbox slowly opened and a second later, a thin torch beam probed the dark hallway. The spot of bright light slid across the floor, crept up a wooden leg and then eased on to the surface of the small table just inside the front door. A polished coconut shell full of loose change. A mobile phone. A packet of extra strong mints. A tube of lip stick. A couple of unopened letters. And a set of car keys.

Next the man hung a square of felt-like material through the letterbox. The flap lowered, then opened again as a garden cane with a hook on the end was fed through the letterbox, the quivering length of wood extending out into the darkness like the tremulous tendril of a plant seeking sunlight. The hooked tip finally made it to the end of the table, but stopped short of the key ring itself. The man strained against the other side of the door, trying to increase the reach of his implement by a few millimetres. But it was no good. He drew the length of metal and flap of material back through the letterbox and the circle of light moved to the edge of the table, jumping suddenly to the far wall and briefly dazzling the man as the beam was reflected back by a mirror. The torch clicked off and the letterbox was lowered back down.

The man walked back down the driveway, the forefinger of one gloved hand lightly tracing the length of the vehicle as he did so.

Back in the car the driver looked at him. ‘Hey Sly, not like you to come back empty handed.’

Sly shot him a sour look. ‘I’ll get them next time,’ he murmured.

They drove on towards Altrincham, coming off the M56 at junction 6, moving along Altrincham Road and ignoring the first houses they passed: the driveways were too long and the gates too high. Instead they headed towards the centre of the village, searching for houses that directly bordered the road with driveways only fractionally longer than the cars parked on them. Soon after passing the fire station they spotted a black BMW A5 parked outside a 1930s semi-detached house.

The men glanced at each other and the driver pulled over in the first available space. Sly got out and returned to the house, automatically noting the absence of a burglar alarm. Seconds later the letterbox was pushed open and the torch shone through the gap. Immediately it revealed an art deco style lamp on a small shelf just inside the doorway. Holding up the globe shaped lampshade was a coppery green female nude, from the outstretched fingers of her free hand hung a set of car keys.

‘Bingo,’ he whispered, hanging his flap of thick material through the letterbox. Next he fed the garden cane through, angling the hook at the end upwards towards the lamp. Breathing in deeply, he made a mental effort to steady his hand then, focusing on the key ring itself, he expertly threaded the hook through it. Gripping the implement as tight as he could, he joggled the thin length of wood up and down until the keys were dislodged from the statue’s fingers. Their weight transferred to the hook and the cane bent slightly – but he was ready for that. He slid everything out, the keys brushing silently against the flap of soft material.

He turned the torch off, placed it at his feet, then grasped the set of keys and slipped them off the end of the coat hanger. After extracting the flap of cloth, he turned his attention to his prize. On the fob was the photo of a young boy, the sort given to grandparents. The key to the BMW was obvious enough, as was the key to the front door itself. Thinking about the lamp in the hallway, he walked to the end of the drive and held up a thumb. The Ford’s engine started up and the car pulled quietly away.

Knowing he wasn’t meant to take anything else from the houses, he returned to the front door and slid the key into the lock. The door opened with hardly a sound. Stepping into the hall, he looked at the collection of photos of the same young boy crowding the little windowsill to the side of the door. Definitely a grandparent’s house, he decided. Reaching round the back of the lamp, he found its cord with his fingers and traced it back to the plug in the wall. Just as he pulled it out he heard a footstep on the landing above. He froze, head bowed. A faint pull of breath came from the top of the stairs. Perhaps it was the absence of a male voice telling him to get out, but he somehow knew that it was a woman. All the advantage was his. She was up there, disoriented with sleep, in her night clothes, probably alone and without a phone.

He pulled a Stanley knife from his coat pocket, held it against one of the photos and slowly dragged it down the glass. A thin rasping noise filled the silent house.

He heard a sharper intake of breath and then a wavering voice said,

From the dark hallway below her Sly leered, ‘And how will you do that Grandma?

You won’t be able to speak if I come up there and kill you.’

She let out a gasp of fright and he heard bare feet running away from the top of the stairs.
A door slammed shut and a key turned in a lock.

He climbed halfway up the stairs and announced in a menacingly low voice, ‘If this key doesn’t work for that Beemer out there, I’m coming back inside for you.’

Then, laughing to himself, he slid the blade back into the stubby handle and returned the knife to his pocket. After wrapping the cord round the figure, he walked calmly from the house, held the key fob towards the vehicle and pressed the button. The vehicle’s security system beeped as all the doors simultaneously unlocked. Minutes later he was driving back towards the motorway, heading towards the Russian’s garage on the industrial estate in Belle Vue. After dropping the car off, its registration plates would be changed and documents prepared for the agent to ship it out to the Russian’s contacts in Moscow.

For this novel, I drew on my experience of seeing Manchester as it was transformed in the run up to hosting the Commonwealth Games. It was an incredible time; millions of pounds were pouring in and landmark buildings were springing up all over the place.

But what fascinated me was how so many of the city centre’s older buildings – many of them derelict throwbacks from Manchester’s industrial past – were simply hidden behind huge building wrap advertisements.

Once the games were finished and the crowds went away, these massive posters came down. With their disappearance, the teams of litter pickers and additional bins also vanished. Soon the real city – dirtier and dilapidated – reasserted itself, and a series of bizarre killings start to occur in my book.

Lead character in ‘Killing the Beasts’ is DI Jon Spicer. As a member of the city’s Major Incident Team, he soon finds himself hunting the killer. The pace of events begins to pick up and, along with it, Jon’s concern for an old friend called Tom Benwell. Jon’s worries are justified – Tom’s mental health is starting to fragment, making him ever-more vulnerable to a sinister figure who lurks in the shadows of the city.

“DI Spicer is ‘a new tec with a refreshingly different personality and approach to the job than the plodders we’re used to.”

“A crime story with a difference...deeply disturbing, often dark and subtle.”

“The novel’s high-quality storytelling has an authentic, documentary feel to it.”

“Where this book scores is in the characterisation…Benwell is a perfectly realised example of yuppie grace folding under pressure.”

“The story’s dramatic events are drawn out, gradually building to a page-turning, heart-stopping – and totally unexpected – ending.”

“This highly polished study of madness and murder shows how well Simms’ talent is maturing.”

“A must read for those who like their crime fiction psychological.”