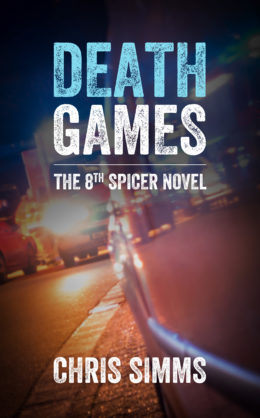 Eighth in the Jon Spicer series

Manchester: an injured survivor from a motorway pile-up flees the scene, leaving behind evidence that a terror attack is being planned…

Jon Spicer, newly trained as a Specialist Firearms Officer, has joined Manchester police’s Counter Terrorism Unit. Thrown out of his previous department and demoted to Detective Constable, he is being kept in the force only because he’ll take on the most dangerous of jobs.

Iona Khan is struggling to find respect and recognition in the male-dominated Counter Terrorism Unit. Her mind might be sharp, but many of her colleagues value physical strength above anything else.

As the investigation quickly snowballs, Spicer and Khan are thrown together. The two officers must learn to trust each other – and fast. Because in this chase, any wrong move could be your last.

Ten minutes later, they were all kitted up. Helmets with visors and leather neckguards, full limb protection, reinforced gloves, attack vests, tasers, batons and handcuffs. Jon knew the gear added a few inches of bulk to them all; they were a fearsome sight.
Hugh Lambert squared up to his raid partner and announced in a low voice, ‘I feel epic.’
‘You, Mr Lambert,’ the other man replied, ‘are so Money Supermarket.’
Pockets of laughter around the group.
‘Any movement in the target property?’ the search co-ordinator, an inspector Jon hadn’t met before, asked.
Iona was over by the monitor showing the live feed from the camera car. ‘Nothing, Sir.’
‘OK, no sound now, lads.’ He lifted a radio and spoke more quietly. ‘Ian, have you swept it yet?’ He listened for a few seconds before replying. ‘Roger that.’ He turned to the group. ‘Listen up, a faint reading in the room across the corridor; that’s first door on the right. The one with a window out onto the street. Who’s Raid One?’
Hugh Lambert and his partner raised their hands.
‘Right. It’s your room. Could be a cat, could be someone in a sleeping bag, could be electrical equipment: just be aware. Shall we get this done?’
Their van came to halt thirty metres from 17a. Because curtains in the property were all drawn, they didn’t need a covert approach. Instead, they jogged along the pavement, the two officers at the front carrying a Double Wam. Larger than an Enforcer, the Double Wam needed two officers to swing it and delivered something closer to fifteen tons of energy to any surface it connected with.
The raid team started to line up in their pairs. Seeing the battering ram being readied, Jon stepped forward. It was the first rule of a forced entry and one pumped-up officers frequently forgot: try the door handle. Locked. ‘Worth a go,’ he whispered and stepped back alongside Kieran.
The Wam officers raised the battering ram again. They looked at each other and gave a simultaneous nod. A signal to the rest of the team. Jon’s mouth felt dry. Adrenaline had made his eyes feel too big for their sockets. Knees slightly flexed, he rocked back and forth on the balls of his feet, just like the rest of the group. If anyone was unfortunate enough to be in the corridor beyond the door, they were getting it. Big time.
The Double Wam was swung slowly back and then rapidly forward. The door flew in with a huge crash. ‘Breach! Stand clear!’ the Wam officers screamed, jumping out the way.
Lambert and his partner piled through the doorway. ‘Police! Stand still! Police! Stand still!’

After what happens in Sleeping Dogs, I couldn’t see any way for Jon to stay in the Major Incident Team. So what could I line up next for him? Which other parts of the police are routinely high in risk and big on danger?
Increasingly, I’ve seen the scope for plots related to terrorism. Ones that explore interesting areas beyond the simplistic ‘Evil Individual Goes On Rampage With A Gun’ scenario.
Death Games is, first and foremost, a thriller. In the aftermath of a motorway pile-up, traffic police stumble across evidence an atrocity is being planned. A passenger, despite being seriously injured, flees the scene.
Jon Spicer, newly trained as a Specialist Firearms Officer, is part of the team asked to find him. So I needed good information on what he’d be expected to do at the sharp end of a Counter Terrorism Unit operation.
I arranged a few pub-meetings with a contact in the force. And the information he gave me was, from a crime-writer’s perspective, gold dust…

“Death Games demonstrates a further refinement of the author's' craft, with Spicer once again a durable and multifaceted protagonist.”

“A superb exhibition of storytelling, with tight descriptive prose and more twists than a Bill Hailey dance track.”

“The plot, involving a potential terrorist attack in Manchester, is thoroughly researched and fast-paced. This is crime fiction of the highest standard.”

The Voices In My Head

Manchester, 2002. The Commonwealth Games are coming to town and the city is alive with possibilities.