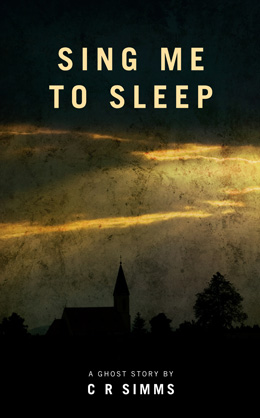 Sing Me To Sleep

Laura and Owen buy a secluded cottage on the edge of the Peak District. Old mines riddle the hills surrounding their new home and, soon after moving in, Laura starts to hear faint snatches of birdsong.

Her husband, wrapped up in his new job, is rarely around. Nervous and alone, Laura fears she’s developing tinnitus. Her doctor can find nothing wrong. Then an archaeological dig on a neighbouring hill unearths some disturbing finds – and Laura’s life starts to become terrifying.

Outside the window, the birds scattered and the garden was suddenly quiet. Strange, she thought, craning her neck to try and see what might have scared them off.

And that’s when the singing started. It was so insubstantial as to be almost the hint of a sound. An echo that hadn’t quite died. She fixed her stare on a distant plane creeping stealthily across the grey sky. Was the sound carrying from somewhere far away? Or was it in her head? She inserted the tip of a forefinger in her ear, wiggled it and listened again. The cascade of notes continued. She raised her hand and gently banged the heel of it against her temple, then did the same to the other side. It failed to dislodge the noise.

The mere act of getting off the stool – the whisper of her silk dressing gown – was enough to drown it out. She opened the window and remained motionless, listening for it again.

Now, she thought, I’ve let the sounds of the outside world in. An engine revving from down in the valley behind the house. A metallic clanking sound. A sheep bleating plaintively and, as if in response, a crow’s mocking caw. None of them loud, but enough to make pinpointing the trickle of notes impossible. Which meant it was coming from inside the house, surely?

She closed the window and then her eyes. Behind the faint whirr of her laptop she heard a snatch of it again. She looked down. It was coming from below her feet. The cellar! It was down in the cellar. But even as she started towards the narrow door in the far corner, her certainty lost strength. Now it seemed to be coming from behind the wall to her right. On the other side of that was the shed with the arched doors. Was it able to move, this bloody sound?

‘First things first,’ she muttered, turning back to the cellar door. The light switch was to the side. She turned it on before pushing the door open. The steep flight of stone steps led down to another flagged floor. She pulled her gown tighter and, as she took the first step, kept a handful of material clutched at her throat.

She remembered the first time they looked around the cottage. She’d recoiled at the cellar’s cold and clammy atmosphere. Owen had said that, if it was to be ever free of damp, they’d have to have it properly tanked. She’d had no idea what that meant.

The yellowish paint on the walls was peeling away, like the skin on a sunburnt back. The slabs making up the floor were covered in a moist sheen. On the bottom step, she looked uneasily about. At face level to her immediate right was the fuse box. The rows of switches were all down. Little labels below them read: cooker, smoke alarm, lights first floor, lights ground floor, lights basement, security alarm. At the end of the row was a large red one labelled Main Switch. A mass of grey wires sprouted from the top and ran up the wall before disappearing through the ceiling.

At the top of the wall on the far side was a small window that, according to the estate agent, swung inward on the hinges along its upper edge. The panes of glass were thick like the bottom of jam jars. Mildew or lichen had stained them a faint green. A low wall of misshapen bricks closed off a narrow rectangle of floor immediately below it. For coal, the estate agent had explained. In times gone by, the window – which was just below ground level outside – would be opened, allowing the delivery to be poured straight through.

Now the only thing in the bricked-off area was a layer of dead leaves that had fallen through the gap at the base of the window above. As she stepped off the bottom step, the leaves rustled and shifted. A shudder gripped her. Toads. Living among the decay. She found the animals repugnant. Owen said he’d removed them, but they must have got back in. Surviving on…it was too disgusting to even contemplate.

Elbows tight at her sides, hand still clutched at her throat, she stood perfectly still and listened. Shelves lined one wall and on them they’d piled various things. Crates of spare plates and crockery. A toolbox. Salad bowls, walking boots and tennis rackets. Tins of paints the decorators didn’t use up. Books on gardening. Paint rollers in their trays. A box containing spare batteries, light bulbs and Owen’s old mobile phone, before he was persuaded to upgrade to something with a touch screen.

A fragment of birdsong wafted across her ears and she looked up at the underside of the kitchen floor. Web-shrouded wires and pipes were tacked to the criss-crossing beams. Did it come from above? She thought it did. Quickly, she climbed back up the stairs, relieved to be out of the dank pit. Standing in the kitchen, she readied herself to listen once more. But she knew – and she had no idea how – that it was gone. For now.

I blame it on my dad. Family holidays, spent camping in deepest, darkest Exmoor, often involved sitting around a crackling fire. Encircled by darkness, with owls hooting from the nearby woods, he would read me the ghost stories of MR James. The scuttle from the warm glow of the fire to the safety of my tent was brief, but spine-tinglingly scary.
Thirty years on, I find myself living on the edge of the Peak District. The rippling terrain, rearing close by to the heights of Kinder Scout and Mam Tor, is fascinating. Canals, old mine workings, crumbling mills and lonely churches dot the beautiful landscape. The potential for haunting stories is huge.

Then, entirely by chance, I was reading about tinnitus. Many people experience a hissing, whistling or beeping in their ears. But some hear fragments of music or other recognisable sounds, including birdsong. How interesting, I thought. Especially if you couldn’t be sure whether the sounds were really coming from inside your head.

“I have read all of Simms's detective novels and expected this to be in the same 'cracking read' vein. In some ways it is, but here the reader becomes the detective, sharing the faltering journey of the main character. Although different, it is gripping in the normal Simms style and by far the most accomplished of his works so far. The use of natural imagery is very clever and it's only at the end of the novel you realise the clues that had been dropped throughout and you had missed. The characters are very engaging and there is a real sense of place and people: I suspect Simms knows the area well. The only minor criticism I would have would be the character of the husband, who seems too self absorbed at times, though this is well explained in a wicked twist towards the end. I thoroughly enjoyed this and it has definite echoes of M. R. James in the suspense, unease and uncomfortable climax. Simms's best so far - approaching maturity as a writer perhaps - and a definite 5 star for me.”

“When Laura and composer husband Owen move to an isolated cottage, echoes of the buildings horrific past are gradually revealed. As Laura is driven to distraction by the strange and scary goings on, those around her seem at pains to discredit her concerns, convinced it seems, of her mental instability. And so we are taken on a chilling journey as Laura determines to discover the truth, despite the escalating danger. The writer subtly balances the frailties of a crumbling relationship against a background of dark secrets and darker deeds. The suspense builds to a satisfying and chilling finale’. As someone who lives in a very similar cottage to that depicted (with equally strange goings on) I found this utterly compelling. Superb writing and wholly recommended!”

Bookworm (a reader's review via Amazon)

“Be prepared for a sleepless night after reading this terrifying ghost story! The last time I felt such a sense of menace in a story was after reading Susan Hill's The Woman in Black, which scared me so much that I couldn't possibly watch the film! I don't think I'll ever enjoy the sound of a canary again. This is a well told traditional type ghost story, with an uncomfortable ending. The ghosts of a murder and a suicide have infiltrated the substance of Lantern Cottage, and strongly, almost fatally, affect the woman who has come to live there. I thought this was an excellent read!”

For their honeymoon Sarah and Andy have booked into a pretty farmhouse. But the property has a sinister history.

Emily's dad is troubled: his young daughter sees people no one else can. But what happens beside a quiet reservoir on a sunny afternoon takes things into far more disturbing territory...

Beautiful and ambitious, Mandy Cost is determined to achieve one thing: fame. The measures she takes soon get her the attention she craves – but not all of it is welcome.