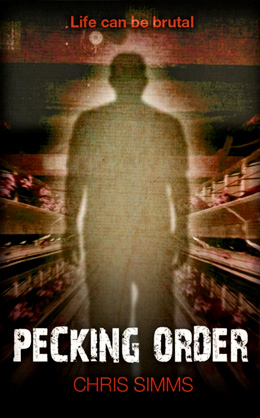 Rubble lives in a caravan and works on a battery farm.Totally oblivious to the outside world, he spends his days disposing of the sick and injured chickens. But all the while he dreams of a life in the army – despite the fact his numerous applications have been rejected.

Then one day a mysterious visitor arrives and sees Rubble’s child-like naivety combined with an ability to kill without compunction. Soon Rubble is employed on a sinister secret project.

Rubble’s only chance of realising how he’s being cruelly used lies with the one person he confides in: a fortune-teller working on a premium rate telephone line. But just how disturbing must her caller’s revelations become before she is prepared to take action?

This chilling thriller explores the darkest reaches of human psychology: that which drives one person to kill another.

With a sound like two twigs snapping, the chicken’s legs broke in his hand. The bird transformed from a hanging bundle of limp feathers to a screeching mess and his fingers instantly uncurled. It dropped fifteen feet to the sand covered ground where it began flapping round in tight circles like a clockwork toy gone wrong.

‘Grab ’em when I lift ’em upwards!’ shouted the man in shit-spattered overalls, standing on a narrow ledge on the lorry’s side. ‘If you don’t,’ he carried on with a note of triumph, ‘they swing back and that happens.’ He nodded towards the ground but his eyes remained locked on the younger worker.

‘Yeah, sorry,’ the teenager replied, disgustedly peeling silver scales of chicken skin from the palms of his hands.

Despite his heavy build, the man clambered nimbly along the stack of cages welded to the lorry’s rear until he was directly above the stricken bird. With its ruined legs splayed uselessly off to one side it continued its futile revolutions, the repeated cries from its open beak merging into something that resembled a thin scream.

He dropped from the side of the vehicle and landed with both boots on the bird’s outstretched head and neck. A thick squirt of blood shot out from under one heel and all movement immediately stopped. The only thing to disturb the silence that followed was a pigeon cooing gently from amongst a copse of beech trees nearby. The man stepped back, revealing a pulp of bone mashed into the loose sand. Then, relishing the appalled attention of the audience watching from the shed above, he swung back a stubby leg and booted the carcass high into the air. A handful of reddish coloured feathers detached themselves, one catching in the current of air blowing from the extractor fan mounted on the shed’s side. The feather tumbled away, up into the clear blue sky.

With arms that seemed a little too long for his body, he climbed back up the wall of cages, each one bristling with beady eyes, jagged beaks and shivering combs.

‘It’s simple – keep ’em hanging upside down and they don’t move,’ said the man, reaching into another cage and dragging two squawking birds out by the legs.

Once their heads were hanging downwards in the open air they immediately went still and he lifted their passive forms to the open door. This time the youth successfully grabbed the legs, and before they could start swinging back, he whipped them inside the shed.
‘You’ll be doing four in each hand by lunch – now out the way,’ said the man perched on the lorry’s ledge, another brace of birds already dangling from his arm.

Though no one said anything, something about the over-enthusiastic way the older man gave out directions reminded everyone of the playground. A schoolboy, prematurely invested with authority by his teacher.

The youth got off his knees and, with a bird in each hand, turned around. Immediately in front of him inside the shed was a tier of empty cages, six high. It stretched away in both directions, the dimness inside the shed making it impossible to see right to either end. The walkway he was standing on was made of rippled concrete and barely wider than his shoulders. Coating it was a mishmash of shell fragments, feathers and dried yolk. Awkwardly he had to struggle round the person next to him, banging one of the chickens against the wall. Once past, he set off into the shed’s depths.

Away from the fresh air at the open door the temperature suddenly picked up and the sharp smell of ammonia dramatically increased. His way was lit by a string of naked bulbs dangling at ten metre intervals from a black cable running just above his head. Thick sandy coloured dust clung to everything. Even the top of the cable was covered in it like powdery snow on a telephone line. The bulbs themselves were almost completely obscured – only the bottom third of each was exposed, and the yellowish light they gave out made him squint. In the gloom above, the residue had formed into web-like loopscurling from the roof, the occasional strand brushing the top of his head. It seemed like a living thing, a kind of airborne mould that made the very air thick and heavy. He imagined that, if he stood still long enough, the spores would settle on him, and eventually he too would become wrapped in its cloying shroud.

To his right the small conveyor belts running along in front of each cage clanked and whined, the moving surface transporting pellets to scores of cages that would soon be stuffed full of birds. Set into the ceiling above him was the occasional fan, blades lazily revolving. Their motion served only to circulate the warm air, carrying the dust into every crevice and on to every available surface.
He walked to the first gap in the steep row of cages, turned right and then immediately left into one of the central aisles. In the gloom ahead of him a dark form crouched. As he walked up to the person he had to step over a lump on the ground. Looking down he saw the tips of feathers and was shocked to realise it was a dead bird. From the layer of powder almost engulfing it he guessed it had been lying there for quite some time. Now in front of the person, he held the two birds out.

‘Cheers,’ said the woman emotionlessly, taking them from him and shoving them upside down into the open doorway of the nearest cage. The birds began clucking in protest, and one started flapping its wings. ‘Get in,’ she said aggressively through clenched teeth, forcing them with the flat of her hand. Inside what was little more than a hamster’s cage, two other birds were already jostling for a firm footing on the wire mesh floor. He watched as one wing fluttered at the side of the door. With a final shove she forced them inside, breaking several feathers in the process. Swinging the wire door shut she announced, ‘Home sweet home.’

Large parts of this novel came from when, as a teenager, I got a job on a battery farm one summer holiday. I’ve had many crappy jobs during my life; but this was by far the worst. By lunchtime I’d had enough – and walked out. I may not have got paid, but I was one sickening experience all the richer.

That morning’s events obviously stuck with me and, years later, came in very useful when I started pondering an article I had read. It described how, if people believe the authority of the state is behind them, they are prepared to perpetrate the most cruel and sadistic acts on their fellow humans. (Think of recent cases of American prison staff torturing inmates in Iraqi prisons.)

I’d seen some cruel and sadistic people working at the battery farm – and I realised it would make a great location for someone who needed to recruit a potential killer.

All sorts of other ideas gradually wove themselves into the plot – including the precariousness of so many people’s jobs in corporate Britain, care of the elderly and voluntary euthanasia. (Plus the potential link between all three issues.)

But it is the character from the battery farm, plucked from his mind-numbing job and duped into believing he’s on a covert mission for the state, who carries the story forward to its dark and violent ending.

“A very robust and creepy tale that had me riveted for a n evening with dark characters that still reverberate in my head. … a rapidly developing talent in the world of crime-fiction. A potential classic.”

“An addictively fast-paced plot. Animal rights, euthanasia, university politics, political correctness and care of the elderly; all are covered with intelligence and subtlety in this thought-provoking novel [which] builds towards an edge-of-the-seat finale”

“Chris Simms' ingenious new thriller… features three wonderfully drawn, extremely flawed protagonists. … A thriller should, ideally, star characters one can care about, move briskly without any signs of sagging, and leave an indelible impression long after the last page is closed. On all counts, Simms succeeds marvellously… a wonderful display of talent from a soon-to-be star of the crime fiction world.”

“An ingeniously plotted psychological thriller…reading Chris Simms is like watching a Danny Boyle film - strong characters in a present day setting, energised with splashes of violence.”

Outside the White Lines
A standalone crime novel

Don’t drive at night. Don’t drive alone. And if you do break down, don’t open the door to anyone even if you believe they’re there to help you.