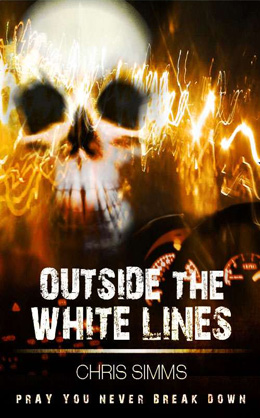 Outside the White Lines

“One of the genre’s all-time great debuts”
Lee Child

Don’t drive at night. Don’t drive alone. And if you do break down, don’t open the door to anyone even if you believe they’re there to help you. There’s a Killer on the roads masquerading as a breakdown rescuer who strikes without warning, killing brutally with no remorse. Roaming the motorways looking for his next victim, even he doesn’t know where and when his next murder will be.

Andy, a young recruit to the traffic police, is determined to hunt the Killer down, jeopardising his own police career in the process. After the third victim is found, he believes he’s seen something crucial – but his partner won’t believe him. Increasingly alienated from his colleagues, Andy becomes obsessed with finding the murderer.

The Searcher is an outcast from society; lonely and misunderstood he unwittingly links Andy and the Killer through his midnight searches of the motorway.

As the police fail in their search for the Killer and the murders continue, increasingly savage and unprovoked, Andy is determined to bring them to a halt. The actions he takes bring all three together in a chilling finale.’

As the tiny voice began to speak another huge lorry thundered past. Spray laden swirls swept around his lower legs, flattening damp trousers against his shins. ‘I’m sorry, I didn’t catch that,’ the man said.
Patiently the voice resumed. ‘I said, try and get your head right into the telephone casing. It will cut out a lot of background noise.’
He did as he was asked and instantly appreciated the advice as the voice clearly said, ‘Can you hear me better now?’
‘Yes much,’ he replied and stopped pressing the telephone receiver quite so hard against the gristle of his ear.
‘OK sir, could you tell me what number is on the inside of the door?’
He angled his head to the side and read out the luminous white number.
There was a pause and the voice said, ‘Right – so you’re just beyond junction 14?’
He didn’t know, but trusting whatever information the voice had to hand, he replied, ‘Yes, that sounds about right.’
The voice then went on to ask him various questions about his vehicle, before finishing with, ‘OK sir, have you got breakdown cover with any motoring organisation?’
‘I have,’ he answered, and pre-empting the next question, he continued, ‘shall I read out my membership details?’
‘Please.’

He held the card down at arm’s length, and using the orange flash of his hazards, read out four numbers with each blink of light.
Drips from the telephone casing fell steadily onto the back of his head as his details were processed. Whilst waiting he reflected on his situation, stranded in the middle of the night on a deserted and unlit stretch of motorway. There was no way he was getting any more than a couple of hour’s sleep before work the next day. Today in fact, since morning was now only a few hours off. He felt frustrated at how his car’s failure had also rendered him completely powerless; up until now he’d always been one of the warm and cosy drivers speeding past the dark, cold cars, parked on the hard-shoulder. Suddenly he appreciated just why these telephones were called SOS points: no-one stops to help on a motorway.

He’d counted 127 flashes of his hazards before the voice spoke to him again. ‘OK sir – you’re down as a priority case, so a van should be with you in just under an hour. I know the conditions are bad tonight but I must advise you and your passenger to remain outside your vehicle, preferably well clear of it and up the grass verge.’
‘Right, thanks for your help, is that everything?’ he asked.
‘Yes,’ the voice replied. ‘Of course if there’s no sign of any van after an hour feel free to call us again.’ The line clicked dead.
‘Thanks,’ he said, feeling strangely vulnerable now the voice had gone. He replaced the receiver on the blank grey telephone, shut the little orange door and stepped back towards his car. With one hand on the roof, he looked through the rear passenger window at his sleeping daughter. Way off to his right, lights began to pierce the darkness. Squinting into the rain he watched them grow in strength until the lorry rumbled past, rocking the car beneath his hand. To his relief she stayed fast asleep in the booster seat. Moving her outside the car was ridiculous he thought, glancing uneasily at the, for now, empty lanes. Guiltily, he climbed into the front passenger seat and quietly pulled the door shut. The dashboard clock read 3:18 am.

The idea for this novel came to me one Christmas when, driving home to my mum’s with my wife and newborn baby, our car broke down not once, not twice, but three times.

By the third time it was the early hours of the morning and the motorway was pretty much deserted as we waited on the hard shoulder. Eventually a white van with a flashing light pulled up behind us and I nearly started to get out of the car. But the way the driver and his passenger were just sitting there staring at our vehicle suddenly made me uneasy – and I realised how vulnerable we were.

After a couple of minutes of nobody moving, the van doors opened and the two occupants climbed out. To my relief, they began sweeping up some debris from a previous crash that happened to be behind our car. When they eventually carried on their way, I saw that it was a motorway maintenance vehicle. But the fact that they could have had far more sinister intentions remained in my head.

The novel also arose from my own frustration at how crowded Britain’s roads are. Being delayed for hours has become a way of life for so many people who use their cars for work purposes. Quite often I listen to the traffic reports on the radio, shaking my head because the bulletins take so long to read, the background music runs out. Congestion is set to get even worse over the coming years. People no longer stop when the traffic lights turn orange. Everyone feels hemmed in by the sheer mass of cars surrounding them. Surely it’s only a matter of time before someone’s road rage tips them completely over the edge…

“A gritty, suspense-filled first novel. . . here is a new crime writer who really knows his stuff – a compulsive and compelling read.”

“Simms’ fresh approach, and the way the story weaves between three viewpoints, makes this one of the most promising debuts in crime for some time. From the prologue’s brutal first pages to the satisfying crunch of the final chapter, the prose is spare, lean and mean.”

“In the tradition of Ruth Rendell, this is not a whodunit but a whydunit that takes you into the minds of the three central, very different characters. Chris Simms combines psychological insight with gritty realism to give the reader a genuinely exciting story.”

“Here is someone to watch, someone who will carve his own unique voice in the crime fiction world.”

“Anyone reading this will do so in one sitting...Simms is really a name to watch out for.”

Rubble lives in a caravan and works on a battery farm. Totally oblivious to the outside world, he spends his days disposing of the sick and injured hens.