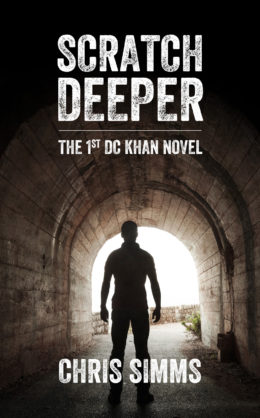 First in the Iona Khan Series

Promoted to Greater Manchester Police’s Counter Terrorism Unit, Detective Constable Iona Khan’s first case appears to be a trivial use of false identity regarding a Sri Lankan student asking suspicious questions about Manchester’s tunnel system. But when she learns the identity of the conference’s guest speaker, Iona realises it may not be so trivial after all, and she must enter the dark world beneath the city to prevent a possible catastrophe.

Reginald Appleton grunted from behind the gag, eyes bulging with terror. In his mind, the words he was roaring were clear. I heard you! Yes, I’ll tell you! Please, please, don’t hurt me anymore.

The pressure on the back of his neck eased, allowing him to turn his head so his face wasn’t pressed into the pillow. Nostrils flaring in and out, he filled his lungs, ears still ringing from the punches to his head.

‘What is it?’ The voice repeated.

The hatred contained in the question made Appleton feel ill. He nodded as vigorously as he could. There had been the faint trace of French in the man’s voice. A local, then. Probably a Creole needing money.

Rough fingers pulled the thick band of rubber away from his lips and something was thrust towards his face. The device beeped and a red light came on. ‘Say it.’

‘Eleven, thirty-three, ninety-nine, zero, four,’ he gasped. ‘There are dollars – ’ the gag snapped back into place, rendering the end of the sentence incomprehensible.

He felt his lower arms being yanked as the person checked his wrists were still bound tight. A hand patted the stubby Henry Moore sculpture on the bedside table.

Appleton moved his head back and forth against the pillow to indicate that he understood. Footsteps quickly crossed the room and he was alone.

His heart was beating so strongly, it caused his shoulders to rock against the mattress. It’s a burglary, he said to himself. Stay calm. He’ll take the cash – how much is there? Ten, fifteen thousand dollars? He’ll be happy with that. He’ll go.

Something warm began to tickle behind his ear. Blood, he realised. My head must be bleeding. He felt it creeping under his chin and across his throat. Anais will be dismayed when she sees the sheets. Cleaning them is going to take hours.

Outside, the cicadas’ grating buzz rose to a crescendo and abruptly stopped. Now came the soft, insistent sound of waves lapping the nearby beach. Something thudded in his study further down the bungalow’s corridor. He recognised the sound – the door to the safe, swinging open and bumping against the wall. He’ll be removing the cash. Probably my watch. Margaret’s jewellery, too. The pearl necklace she always favoured when we dined out. It doesn’t matter. They’re only things.

The thin whine of a mosquito passed his ear and he knew how the man had got in. He lifted his head and was able to make out the neat hole cut in the screen that covered the window he’d left open. Arching his head brought into view the red button of the panic alarm mounted in the wall above his bed. He cursed himself; why on earth didn’t you close the window? You grew complacent and now you’re getting what you deserve.

The sound of the footsteps coming back caused the throbbing in his temples to quicken.

The shadowy form came into view. Appleton could see a small bag hanging from one hand. The person looked down at him and the old man closed his eyes so they were almost shut, like a child pretending to be asleep.

Then the figure walked over to the window. Appleton breathed out. He’s going. Thank the Lord, he’s going.

But the person placed the bag on the floor. The objects inside made a faint chink. He turned round and walked back to the bed. Now Appleton really did close his eyes. Please go. You’ve got what you want.

Hands gripped his shoulders. As he was turned onto his back, he felt the hairs of his chest pulling clear of the blood that must have pooled beneath him. His bound wrists dug painfully into the small of his back. Fringed by thick strands of long hair, the dark face looked down, all but a silhouette against the moon filling the window behind. The buzzing of the cicadas was starting up again.

Appleton’s breath caught in his throat.

The thick band of rubber was peeled down. ‘Password.’

As he gave his daughter’s name and year of birth he sent up a silent prayer. Please let me see her face again.

The gag snapped back and the man vanished from view. Appleton stared at the ceiling. The tropical heat seemed to have vanished. He wanted the password. If this is a burglary, why would he want the password? He must be after something on the computer. Why not just take the hard-drive? This doesn’t make sense. I’m not important anymore. I’ve retired.

He tilted his head back to stare at the red button. Could I turn myself over and get onto my knees? Raise myself up and press the thing with my forehead? Smash my skull in. That’s what he said if I move.

He started rocking himself from side to side, trying to build up enough momentum to turn onto his front. No strength, he thought. Not since the hip replacement last year. He thought of his daughter and grandchildren back in Britain. James and Sophie running down the drive to meet him with their arms outstretched.

By bunching his hands into fists he was able to form a fulcrum at the base of his spine. He began to rock himself again and, with a push of his hands, finally flipped himself over. He was back in the patch of blood, now cool and sticky.

The keys continued to tap as he sucked air through his nostrils. Not enough oxygen was getting in. He felt dizzy and faint. Sweat was running down his temples. Or was it blood? You can’t stop, he said to himself. Not now you’ve moved. Bit by bit, he brought his knees under his chest. Groaning with the effort, he managed to slowly raise his shoulders up. Down the corridor, the printer continued to click and whirr. The Henry Moore sculpture caught his eye and he had to look away. Nearly there, he thought, focusing on the red button and shuffling from one knee to the other. Almost close enough, almost close –

Something black moved in the periphery of his vision.

Appleton swivelled his eyes to the side.

The person stood watching. When he spoke, Appleton could tell he was smiling. ‘I hope you’ve enjoyed your time on this island.’ His voice dripped with contempt.

The man shook his head as he reached for the stubby sculpture on the bedside table. His hand bounced as he measured the weight of it. ‘Time to pay for what you did to my people.’

He raised the chunk of stone and Appleton’s cheeks puffed out as he tried to scream. The base of the sculpture thudded into the back of his skull and the old man pitched forward. He saw Margaret, waiting for him in the bluebell woods where she so loved to walk. And then the lump of rock came down again, this time causing a fleshy crunch. Appleton slumped to his side and two thin lines of blood hissed into the air, pattering against the mahogany headboard. The sculpture was brought down again and again, shattering and then pulverising facial bones beneath it.

Eventually, the man stopped. He gazed down at the corpse, breath undisturbed by the effort. The dripping sculpture was dropped onto the blood-spattered bed and the cord tying Appleton’s wrists was loosened enough for one hand to be pulled free. Carefully, the man lifted the slack arm up, straightened Appleton’s forefinger out and carefully pressed it against the panic button.

As the shrill alarm drowned out the cicadas’ song, he counted to ten then strode across the room, picked up the bag and climbed back through the hole in the mosquito screen.

As is often the case with me, this novel came about when a couple of ideas fused in my mind.

Having been brought up in rural Sussex, I’m fascinated by Manchester: especially its dark and grimy beginnings as the world’s first industrial city.

Its history resonates strongly today – from the gothic splendour of its municipal buildings to the imposing structures of its former mills and warehouses.

Manchester also has tunnels. Lots of them. But, because the city evolved so quickly, nothing  definitive exists that shows where they all are. Why many were even dug remains a mystery. But they are there, lurking beneath the streets. I knew, one day, I’d find a story that involved them.

That day came when I was mulling over the fact the Labour and Tory parties take it in turns to hold their annual conferences in the city centre. The huge venue they use was once a railway terminal. That would be good for a terror-bomb-plot type novel, I thought.

Then I remembered the presence of the tunnels: the two things connected. A bomb plot on a party political conference using the tunnel network to launch the attack. A bit of research revealed that a derelict tunnel actually does run directly beneath the conference centre. Bingo.

It followed that the police who’d deal with this kind of threat would be from the Counter Terrorism Unit. DI Jon Spicer, my lead character of previous books, is in the Major Incident Team. So I needed a new lead character. One that I could make very different to the six-foot-four, no-nonsense, Spicer. Step forward a five-foot-two, female detective called Iona Khan…

“Plenty of tension, a likeable heroine and some superb set-pieces in the claustrophobic subterranean tunnels add up to an exhilarating read.”

“A good police procedural with an interesting and engaging lead character.”

“Simms skilfully builds tension in this procedural featuring an appealing protagonist, a persevering bi-racial woman in a man’s world.”

A Price to Pay
Second in the Iona Khan series

The death of a teenage runaway leads Detective Constable Iona Khan into the most disturbing case of her new career.